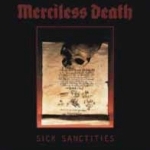 Here wo go. Another old school release on vinyl from the great High-Roller-Records. This record was originally released in 1993. I first thought it was a release from the American Thrash Metal band MERCILESS DEATH, but the names of the band members on the back of the sleeve didn’t fit to it. So Google told me that this record was made by the Polish MERCILESS DEATH which seem to have a little name in the underground scene. The record is the habitually High-Roller-Records quality and limited to 500 copies. The music is rumbling old school Death Thrash Metal, which reminds me of old SODOM, VENOM and friends. After listening to the whole record I’m not surprised that I never heard of this band before, because only the second last song stays in my mind. The rest is just average Thrash with some Death elements and a needless instrumental at the beginning. So a great packaging, especially the great cover, for an average content. But a perfect release for the record collection of real underground old school bangers. www.otostrona.pl/mercilessdeath, www.myspace.com/mercilessdeathpolska