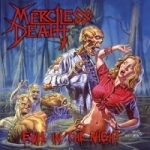 I remember the first time I heard this CD last year (as it was originally released in 2006 as the band’s debut demo. Now re-pressed with a pro booklet, pro cover art by none other than Ed "Fucking" Repka and what appears to be a heavier overall remix) I was fuckin’ shocked to say the least! For two reasons: one that there was another band in this State that was not only into the same music as is my personal favorite of Metal yet was just as fast and technically proficient as my last band DEKAPITATOR! As for years there hadn’t been any new Thrash bands like DEKAPITATOR from anywhere in California since the old days. Almost two decades in the past, when the legends of those specific bands that we all looked up to strode the earth in their prime, playing shows on a weekly basis and their videos were in heavy rotation on Headbanger’s Ball. So yeah undoubtedly as any of you could imagine my surprise of "Whoa… fuck… cool!" when I hit the play button and sat back to do some mail was considerable. For those maniacs who are just now hearing about MERCILESS DEATH, let me say that "Evil In The Night" now in its revised presentation is worthy not only of your attention but most assuredly worthy of your hard earned cash! Featuring eight songs of blistering, and I mean blistering Speed Metal that just puts the word adrenaline to shame. P.S. At press time a limited edition vinyl version of this album shall commence soon, as will quality woven official logo band patches. Get in contact and get ’em while they’re hot! Contact: www.myspace.com/mercilessdeath or info@heavyartillery.us or www.heavyartillery.us