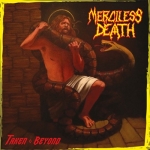 About 10 years ago something that is nowadays referred to as the “Thrash Revival” happened and brought up a lot of (mostly Mexican – American) bands in skintight blue-jeans and white hi-top sneakers playing more or less average US Thrash Metal. One of them was MERCILESS DEATH which the 15 year old me actually very much enjoyed before releasing their second more or less poorly sounding album entitled “Realms Of Terror”. After that MERCILESS DEATH somehow disappeared into nothingness to come back in 2015 with a new and self-released record called “Taken Beyond”. Some months later High Roller Records took care of releasing it properly on CD and vinyl and here we are. After seeing their new logo and the cool looking cover art I was really excited to review this one, and I did not get disappointed. But to make it clear from the start, “Taken Beyond” is a record that rather lives from its charm than its actual musical quality. The band this time turned a bit more towards a Death Metal influenced songwriting approach with lots of obscure bits and pieces. The production is very DIY – sounding, the drums are rough but yet on time and the vocals sound as if the vocalist got squashed while recording them – but I guess this is what makes this record interesting (as it is the case with many all-time extreme Metal classics). Starting with a very old school horror movie influenced guitar intro the record opens up its gates of damnation with the crushing ‘The First Temptation’. The second track ‘Manifestation’ is a bit weaker but ‘Witches Spell For Death’ grabs the listeners attention full-time again. Rattling drums playing odd fills and straight but still playful riffs make this a pretty nice attempt on classic sodomized Witching Metal. The next track continuous with some more obscure drumming combined with early Death Metal riffing. ‘Oath Of Revenge’ decreases the tempo at first a bit only to speed it up again after the first half of the song. ‘The Evil Of The Night’ continuous with a really cool intro and a catchy chorus followed by ‘Christians Of Gomorrah’ which again puts its emphasize on the earliest days of Death Metal with its swirling riffs and blast beat assaults. This is also one of the songs that depicts the diversity that is included on this record quite good since MERCILESS DEATH incorporate everything from fast to slow, simple to chaotic as well as stomping and thrashing parts. ‘Convictions’ is together with ‘Manifestation’ the weakest moment on the record but still no disaster at all. The final track ‘Prepare The Soul / Taken Beyond’ again starts with some clean guitar fiddling, this time a bit less horror inspired but a bit more musical in general. The ‘Taken Beyond’ part once more underlines what the whole record stands for and worships obscure and primitive Metal throughout its entirety. To sum up “Taken Beyond” I would say that people who are into pre Blackfire SODOM, HELLHAMMER / early CELTIC FROST or POSSESSED might want to check this release out. Don’t expect something that is nearly as good as the before mentioned (or the original MERCILESS DEATH from Poland), but still MERCILESS DEATH manage to include some of the same charm and fuck off attitude that made these bands legendary and is therefore way better than everything that claims to be innovative nowadays. Click here to make up your own opinion – www.facebook.com/pages/merciless-death/118123311554669, www.hrrecords.de