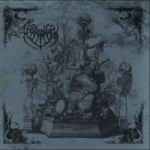 This is really wicked. I mean, I have (tried to) pay close attention to the Black Metal scene, the Death Metal category and well… Metal in general. There are unavoidably some bands that pass by without as much as a little sigh of attention, no matter the quality of the releases. I mean, if you don’t work with this day and night you are destined to overlook a few bands. And that’s all fine, since there are other important things in life; be it eating, taking a shower, watching the news, listening to your favourite bands… Yeah, you know what I mean! When I read that Merrimack are the leaders of the “French Black Metal Revolution”, or that the cover is eye-catching or that they have a cult name in the Black Metal scene, I’m all ears. What went wrong, since I’ve never heard a single note played by this band prior to “Of Entropy And Life Denial”? Maybe I was too occupied with Deathspell Omega, perhaps I was looking closer at the eye-catching cover art of an album such as Rhapsody’s “Dawn Of Victory” (now, that’s what I’d call an eye-catching cover) or maybe I was too focused on other cult names in the Black Metal scene, be it Watain, Mayhem, Marduk, Funeral Mist or Gorgortoth? Well, what’s done is done and here we are with another furious Black Metal release recorded in the Necromorbus Studios (Watain). And fact is, “Of Entropy And Life Denial” has all the necessary ingredients you need. There is fast and fuming Black Metal, we get our dose of mid-paced rhythms designed to please the devil and this is all wrapped up in an excellent production where the level between the vocals, guitars and drums are finetuned. And then not much more. Merrimack performs Black Metal without a slightest sign of originality, provocation or attitude. It’s like they just rehearse some tracks and then record them. I don’t fear Merrimack. It’s not evil. It’s not creative in any sense, meaning that you’ve heard it all before. Even their sixth track, a song that stands out a lot due to the different vocals, does add to this lack of creativity. But the world is full of paradoxes, right? Yeah, that’s all right and I actually enjoy the approximately 50 minutes of deadly Black Metal. However, in contradiction to the case of Deathspell Omega versus Roy Kristensen, I don’t get pleasure from Merrimack’s new release due to the atmosphere, but rather as a result of well crafted arrangements and an album that feels like a whole unit instead of 11 tracks that stand on one’s own feet. If they had managed to spawn the atmosphere of such acts as Deathspell Omega and Watain, I’m sure “Of Entropy And Life Denial” would be up / down there in the Black Metal league with Satan. merrimack.satanslegions.com, www.moribundcult.com