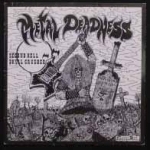 Diabolical Constellation Productions have unearthed one of the best split albums ever released. This was originally released by Killer Elite Records way back in ’86 but now repressed by this newly formed label in noble digipak form. METAL DEADNESS is the testament of two very young pioneering bands that stormed our ears during mid 80s with their very aggressive and unrelenting brand of Thrash that even reaches the Death boundaries ocassionally. The split kicks off with SECOND HELL virtually spitting fire from their instruments song after song and will surely punish your head to an unspeakable level. ‘Prophets Of Hell’ is a blast, ‘Homicide’ and ‘Face The Truth’ are also capable to show us the how intense this band actually was. Next in line are SKULL CRUSHER which (even though somewhat slower) still provides the listener with a dose of maniacal Metal coming directly from the pits of hell. Netherlands has always been one of the most productive scenes of Europe and METAL DEADNESS is a living proof of that. Attention people into early ONSLAUGHT, early POSSESSED, MINOTAUR, old KREATOR and old SODOM… This is for you… Get this gem at: www.diabolical-constellation.com