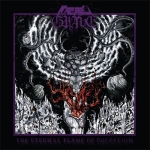 Chile is mostly well known for its superb extreme Metal squadrons but it can produce some excellent classic Heavy Metal as well. The best example for this fact are METAL GRAVE, a four piece outfit from the shore of Valparaiso. The band, established in 2010, plays raw occult Heavy Metal with lyrical themes based on history and mythology and is (quite obviously) heavily influenced by the NWOBHM. The seven tracks (incl. a long instrumental intro) being gathered on their debut "The Eternal Flame Of Deception" are enriched with various delicious ingredients and offer a lot of variety throughout the entire album. Due to the strong metallic craftmanship and skilled playing abilities the quartet is able to keep the quality of each track high – resulting that METAL GRAVE are able to grab everybody who listens to their tunes. The band provides two longer, epic tracks (‘Journey Into The Unknown’ and ‘The Seventh Circle’) with a running time of more than 8 and 9 minutes respectively were these four lads show their great potential. Numerous tempo and rhythm changes, extended killer leads and heavy riffing are carefully arranged and wrapped into a dark atmosphere. The horde has really got the hang of it how to create a fantastic alloy of true steel. Furthermore these South American Metalheads have a very capable vocalist within their ranks. He has a pleasant, sometimes raw voice and delivers some bloodcurdling high pitched screams as well – so King Diamond will flash immediately into your mind. Some other highlights of the disc include the fast paced ‘The Court Of King Minos’ and the fantastic instrumental ‘The Judgement’. This longplayer is highly recommended for fans of MERCYFUL FATE, PORTRAIT, ATTIC, SOLITUDE, ANGELWITCH, IRON MAIDEN and (old) British Metal in general. So headbangers into quality music who have a soft spot for the bands named above shouldn’t hesitate to check them out. You can visit the band’s website at www.facebook.com/heavymetalgrave or their label’s domain at www.evilconfrontationrecords.com.