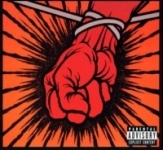 I’ve had enough!! More than enough!! Everytime I open a magazine they have to praise this album?? What’s the reason?? Perhaps because their label is paying for advertising and then they have to kiss their ass?? Fuck off!! I’m not getting paid, so I’m going to say what we (the ex-fans) really think: THIS IS SCUM!! The truth is, that after their shitty “Load” and “Reload”, I thought this couldn’t get any worse and that… who knows, perhaps they reconsidered it and decided to do something interesting again, but… fuck!! Like I always say: “human stupidity has no limits!!” Just when you think they can’t do it any worse, don’t worry, they can!! “St. Anger” is fucking shit, from the cheesy album cover, going through the boring songs with ridiculous choruses such as “tic, tic, tic, tic… tic, tic, tic, toc…”, Nu-Metal riffs, the RED HOT CHILLI PEPPERS influences… until coming to the worst point… the production!! What’s this?? A bad joke?? How come that the band with the best equipment, best studios, best producer… can record something like this?? Listen to the snare-drum… that weak guitar sound, that nonexistent bass that not even Robert Trujillo was allowed to record… I think they’re laughing at us all, and that their message is something like: “Can’t you see it?? Even releasing our worst songs, with the worst production and the worst presentation… we’ll continue earning money, headlining festivals, get all magazine covers… nobody will stop us!!” Well, maybe not, but for me, who hasn’t bought any of their albums after their “And Justice For All…”, they’re totally done. Thinking they will ever come back is an utopia… don’t buy this disc, you’re warned!!