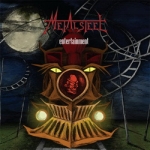 When it comes to Metal from Slovenia then there’s absolute no excuse to miss this superb quartet from Medvode. Even though they have already been around since 1999 things became really serious not until 2001(according to the band) when METALSTEEL released their first sign of existence in form of a five track demo simply called "Metalsteel 1". Within this long period of time this traditional Heavy Metal force has unleashed four studio albums ("Usoda" in 2003, "Taste The Sin" in 2005, "Bad In Bed" two years later and their fourth effort I am reviewing here in 2010) and a live album called "Steel Alive" in 2011 to celebrate the 10th anniversary of the outfit (which marked also the first live release of a Slovenian band ever). The title can’t suit any better as the ten featured tracks (incl. an intro) really entertain you the best way you can imagine. Exquisite prowess of each musician, fantastic songwriting which leaves nothing to be desired and a powerful production are guarantors for roughly 40 minutes of top notch Heavy / Power Metal. Bassist Matej Susnik was chosen by Texas legends HELSTAR to support them as live musician in 2010 & 2011 which underlines the class of the band here as well. The connection to the US Metal outfit remained as the mighty James Rivera teamed up with METALSTEEL and supplied the lead vocals for their tune ‘Let Me Be Your Guide’. The songs on the entire album have a lot of varity. You can find dynamic midpaced tracks like ‘Life Story’ or ‘No Time To Cry’, cool rockers with a some nice groove (‘Candy Eyes’) and of course some uptempo stuff like ‘One More Shot’, ‘I Like’ or ‘United By Metal’ (a real speedy anthem which is for sure a killer at live shows). I personally enjoy the vocals as well as Benjamin Kic has a pleasant but nevertheless powerful voice and he doesn’t provide the often used high pitched style of singing within the genre. If you enjoy your Heavy Metal powerful and skilled then you should not hesitate to check this four piece out. For more info you can visit the band’s site at www.facebook.com/metalsteel.