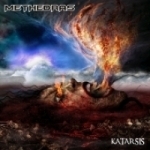 Italian Death / Thrash Metal combo METHEDRAS ain’t any rookies in the worldwide Metal scene anymore. The band started out back in 1996 – and since then they have released 3 full-length studio albums off which their latest one, "Katarsis", was put out in 2009 already by Punishment 18 Records. Musically, they sound like a high-octane wrecking machine that comes mercilessly towards you with its all cylinders firing up; i.e. sounding frenzied, hostile, brutal and all that. Technical wise, we deal with a bunch of skilled musicians here who have clearly taken their time to get the songs together for this very much quality release of theirs; the songwriting is on top-notch level in the METHEDRAS camp, the guys keeping things all the time interesting yet somewhat challenging for the listeners. The backbone for METHEDRAS’ metallic approach has been built around a modern and technical Thrash Metal that has also been spiced up with Claudio’s very convincingly done (Death) growls that tend to remind me of a relatively similar vocal approach of Chuck Billy he did on TESTAMENT’s uncompromisingly heaviest record to date, "Demonic". Then there’s this more ‘modernized’ approach to their stuff as well, in which one could easily claim they have also been inspired by such modern Metal acts as LAMB OF GOD and MACHINE HEAD that on the other hand, could partly be even true because there’s a few elements within their songs that give a fair reason to believe so. All the 9 songs on "Katarsis" scream for some of those quality musical values that make one to return back to this record more often than just occasionally. The bonus track, ‘Nightmares’ – then again, would have been left off of "Katarsis" totally due to not kind of fitting into the same content with other songs on the record. It’s the female vocals in that aforementioned song that simply don’t fit in there. Nothing against for having Lady Godyva to sing on this record, but in METHEDRAS’ case they would have done better without her vocal input as well. In summa-summarum, "Katarsis" is a professionally and skilfully played record nevertheless – and I personally am running high hopes for their next recording already. www.methedras.com