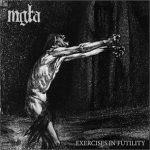 This album was ranked high on this site’s poll of 2015, so it definitely deserves a mention on these pages. Actually this record came out of nowhere since the band has been named once or twice in a review but no album in their discography was subject of study despite their formation goes back into 2000. After that they released three full-lengths, namely ”Groza” in 2008, ”With Hearts Toward None” in 2012 and ”Exercises In Futility”. Two compilations were released, one in 2007 (”Mdlosci + Further Down the Nest”) and in 2013 (”Presence / Power And Will”) featuring the bands EPs. The band consists of Darkside on drums and M on vocals, guitars and bass. That it takes two guys to deliver such a killer album is amazing. As a trademark of MGŁA, all tracks contain the album title and are distinghuished by latin numbers. The track ’Exercises In Futility III’ has a main riff that reminded a lot of THORNS track ‘Existence’. Compared to the previous albums, ”Exercises In Futility” doesn’t differ that much in general. It does have a way better production that suits best with the atmosphere and the songwriting just got better. Bands that came to mind listening to this were NEGURA BUNGET, PLAGA and FURIA. But at times also KHOLD and even BEHEMOTH. Yet, it isn’t brutal, hateful or agressive without feeling soft. That’s the might and dynamics of (today’s) Black Metal because you wouldn’t miss it anyway. If acts like the ones mentioned here didn’t appeal for being too progressive, melacholic or whatever, on ”Exercises In Futility” it all falls together and makes sense. Just listen to a track like ’Exercises In Futility IV’ or ’Exercises In Futility VI’. It’s simply great! The tracks aren’t short but that’s not an issue, since you wouldn’t mind. This stuff is haunting and baffling and this album could as well be their breakthrough record. If bands like DIMMU BORGIR, DISSECTION or IMMORTAL were able to reach the borders of the underground, why not MGŁA? For more info you can check these links: www.facebook.com/mglaofficial, www.facebook.com/northernheritagefinland