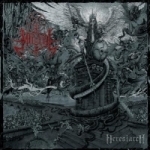 Who let these blood-thirsty and filthy wolves out? Western Australian hellish hordes MHORGL, are on the loose anyway. I mean, these Black / Thrash Metal bastards’ 3rd studio album, "Heresiarch", was released in the fall of 2011 already, collecting quite much a praise-worthy applause amongst the extreme Metal loving community for its ultra-violent, bestial and blistering mixture of both Black and Thrash Metal. Let me tell you first that this four piece unit is full of experience in some other bands as well; the band members of MHORGL legions are associated with such unholy Christ-whipping armies as IMPIETY, THE FUROR, INFECTED, TYRANT and some others, so you may already want to understand we don’t deal with any innocent choir boys of some Sunday school here. Most of the time our Aussie fellows operate at insane, almost hysteric speeds on "Heresiarch", distantly reminding me of MARDUK, DESTRÖYER 666 and even early IMPALED NAZARENE but also clearly understanding the importance of not too one-dimensional approach towards their stuff they churn out on this record. Even if their blackened, sometimes surprisingly yet nicely rockin’ even – Thrash Metal (check out such songs as ‘Black Wolf Militia’ and ‘Ravenous Wargod’) is mostly very fast-paced – for the most part of it anyway, the songs never get any messy due to these enormous speeds that dominate the song structures. The interaction of every single instrument is amazingly very sharp and uniform, creating a tight wholeness playing wise. Another thing is that there’s a few acoustic interludes included for this record that kind of bring a momentarily peace to the MHORGL’s raging warzone on "Heresiarch". But don’t ever mistakenly fall to think the MHORGL would never raise their white flag for the sign of peace and eternal harmony; they are out there for total annihilation – just to kill and murder, mastering their own battlefields completely. www.mhorgl.com, www.sovstudios.com