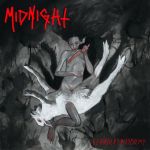 MIDNIGHT – maybe not the most original name for a band and taking a look at the monicker, which is rather plain and simple, plus the short running time you can get an impression of what the music might sound like. The opening track is titled ‘Fucking Speed And Darkness’ and this is all what MIGNIGHT is about. Formed 17 years ago as one-man band by Athenar and counting 23 releases (demos, singles, split EPs) “Rebirth By Blasphemy” is full-length number four. The first three albums were released on Hells Headbangers Records, a name which makes every Metalhead sit up, because for 20 years the label is responsible for excellent releases. Not necessarily restrained to a certain genre, instead focusing on bands with dedication and commitment to Metal music. Now Metal Blade Records is in charge, another well-known company with a glorious past. Since MIDNIGHT are not the only band combining Speed Metal with Black Metal (both in its 1980s version), so what is Athenar doing better than the rest? First of all it is the sheer power, the full-throttle energy, compressed in a sound which is sounding old school and at the same time avoiding the smell of stale beer or air. Secondly the music, when it comes to songwriting, is rather kept simple. But there are many catchy guitar-leads, which would easily suit any NWOBHM outfit. So the technical skills, although embedded in a plain and bare kind of music, are not inferior compared to bands with a more complex approach. You can discover many details, but the joy of listening is never impaired, instead all songs are forged in one piece. Enough said, go and get your deadly dose of hellish, blazing and infernal Speed / Black Metal at https://midnight-ohio.bandcamp.com or at the label’s site www.metalblade.com