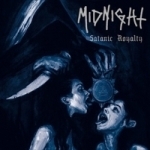 MIDNIGHT is one of those bands that have released many recordings and have been active since 2003, without releasing a proper full-length until now. Consisting of the main leader Athenar (Or Jaimie, best know for doing bass for the mighty Speed Metal purveyors DESTRUCTOR on their last album) and two more musicians, there was a time where this seemed to be more of a side project than a formal band. Most of the available releases are raw, almost low-budget recordings that capture a raw essence that give the band a charm of its own. But that changed with the release of "Satanic Royalty", their debut album. First, they have finally a proper production, and it only shows us that MIDNIGHT is a quite raw form of occult Heavy Metal from the very inception of the songs, their compositions and their execution. The band keeps it simple with few riffs on their songs. But then again, they all have that charm of sounding with an identity. Their style can be compared to early VENOM, early MOTÖRHEAD, and many of the lesser known NWOBHM bands that permeate in their songs with that melodic essence, yet done in a very raw, primitive-like form, and yet still very well done. There is also a strong very 80s Speed Metal influence that at times has me wondering if I was not listening to Bay Area demos with Cronos as guest vocalist. And even if the vocals, with their raspy Lemmy-ish approach are probably a bit limited in here, in the end it all fits together. At only over half hour long, this disc is not enough. More than one will feel that essence where it was a charm to gather in a friends house with a rusty tape that arrived since travelling thousand of miles and with a triple ‘hiss’ effect, but containing a new obscure Heavy Metal band, that seemed always heavier than anything ever heard, with that rock and roll soul intact. After a few listening I was chanting MANY of the songs included here, as if they were old time great hits. Yes, they will be in the time to come. Occult Hardrock has never been better than this. www.myspace.com/athenarsmidnight, www.hellsheadbangers.com