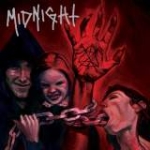 Cleveland’s Speed Metallers are back with a new album – it took them 3 years to complete it, but in the meantime the guys toured a lot, and managed to release 2 EPs, a live album and a compilation, so we can actually say they are in motion all the time. "No Mercy For Mayhem" sounds exactly like you would expect it: it’s evil, dirty, mean and vulgar. And it’s awesome. Wherever they show up in a new place, they have new fans after leaving the stage, as their music offers what we all love so much: energy, passion and honesty. While many major labels or big festivals focus on brand new genres and try to follow or even create new trends, MIDNIGHT takes us exactly into the opposite direction. Rough, almost with a Punk attitude of the first BATHORY album? Dirty but epic riffs and melodies like ripped off from the first VENOM albums? Rock’n’Roll spirit wet of beer and whiskey, like this one we remember from the early MOTÖRHEAD albums? That’s right, it’s all here, on "No Mercy For Mayhem"! And just for the record: the CD version includes one bonus track titled ‘Destroy Tsunami’s Power’, and the first CD pressing has an additional bonus disc with the "Alive On The Streets Of Cleveland" live album (originally released in 2013 on LP). More information: http://totalmidnight.webs.com and www.hellsheadbangers.com