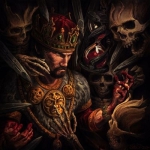 The Florida based MINDSCAR are by far not a new name in Metal. They already were around at the turn of the millennium, having released a self-titled EP in 2001 before breaking up very soon afterwards. In those days, MINDSCAR were a Black Metal band, not a very good one, according to the videos that can be found on youtube. And they featured a now high profiled name in their line-up with Matt Heafy, infamous for being a part of the overrated TRIVIUM. MINDSCAR guitar player Richie Brown also played the bass in a very early incarnation of this mega-selling band, but left them before they recorded anything. But the connection to Matt Heafy never really broke up, so he contributed as a guest musician to the first MINDSCAR full length “Kill The King” that the band released now, three years after they reformed in 2012. I didn’t really knew about the connection between MINDSCAR and TRIVIUM when I listened to the album for the first time, but it wouldn’t have changed the fact that “Kill The King” is a really hard to bear record anyway. Yes, the musicians on this album are really good at playing, yet they are victims of this illness of “having something to prove”. So, this album doesn’t really have a straight beat or a song without roundabout a hundred breaks. Imagine a mix of Metalcore, these weird Relapse bands like THE DILLINGER ESCAPE PLAN and a little bit of Death Metal with ingredients of Grindcore, and you might have an idea of how MINDSCAR sound. The Black Metal of the old days of the band isn’t really recognizable any more, maybe only in the lyrical approach and in the chaos of the song’s structures. For some, “Kill The King” might be a kind of revelation, but to me it’s nothing more than an album that’s technically impressing, but musically nerve-racking. Check out www.mindscar.com or www.facebook.com/mindscar to see for yourself.