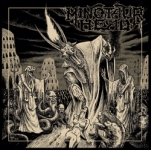 There might be quite a few people rolling their eyes while hearing the name Rogga Johansson. And some of you might say that this might happen for a good reason, since this Swedish gentleman is responsible for being the mastermind of countless bands, and even more guest spots / contributions on other releases as well. Should not be a problem at first sight, but when you dare to listen to a few of his current and former bands / projects you get to know quite quick what’s rotten in the state of Denmark (or Sweden in this particular case): most of them just sound so similar to each other, that I’m not sure, if Rogga himself is able to recognize each and every of his own bands by hearing just one song. To be honest, in my humble opinion he would get along so much better, if he would concentrate on just two or three bands (how about just ONE? – Frank). But enough of that negative shittalking, because on the other hand I still enjoy his current and former bands like PAGANIZER, REVOLTING and RIBSPREADER a lot. So every time I get to know about a new project of mister jack-of-all-trades, I’m curious to get to know what it may sound like. So not long ago it happened that I stumbled over the name MINOTAUR HEAD being praised as a new band with the involvement of Rogga and no less than scene veteran Bob Bagchus. Their ways already crossed a few years ago when they decided to form TO THE GALLOWS, which later on led to the ascension of an already familiar name: SOULBURN. At this time Rogga was already out of the band, so I have no knowledge if this early joint venture already spawned some tunes. Now it’s 2016 and with the recruitment of Ronnie Björnström (ex – RIBSPREADER, ex – AEON) and Theo van Eekelen (HAIL OF BULLETS, ex – THANATOS) they completed the line-up to record "Realm Of Filth". But before we go on with this autopsy here, there’s one question in advance: do we really need another Johansson project? In case of MINOTAUR HEAD the answer is close at hand; yes we do!! Because this time the Swedish multi instrumentalist created something different in contrast to its prior aural eruptions. And I’m pretty sure that it is owed to the co-operation with Mr. Bagchus, as he is already around for a few decades and grew up to the raw sound and first steps of the more rude side of Metal. So this time it was not about Swedish Death Metal or Death Metal in general. Far from it!! MINOTAUR HEAD is the incarnation of lethal, raw and apocalyptic Doom Metal. A description on their Facebook page claims they drew their influences from bands like early BLACK SABBATH, TROUBLE and WINTER. Well, I have to admit that I have never been that much into classical Doom and therefore can’t tell if TROUBLE might have been a hearable influence to "Realm Of Filth", but at least the two remaining acts obviously left their stains on the 7 tracks. Especially the opener ‘Drowning Life’ and the sixth track ‘Mundane Treasures’ breath and carry on the spirit of Iommis’ riffing and a certain SABBATH – esque vibe is noticable. Not to forget the really suiting solo in last mentioned song. Well the New York based trio with its milestone release "Into Darkness" surely had an impact on the whole sound the Swedish / Dutch powerhouse is about, but I won’t take hat comparison too far. The guitar tuning / tone and the kinda warm but bone dry production is quite similar, but with a slightly lesser apocalytpic end time atmosphere. Listen to ‘Hidden Death In The Permawinter’ and maybe you agree that there a some subtle CELTIC FROST / TRIPTYKON references on that 38 minutes of doom’n’gloom as well. I’d like to emphasize some thoughts about the contributions of the main characters behind MINOTAUR HEAD. Despite all the prejudices Rogga might deal with when throwing in some new chops of bloody Metal to the hungry lions; this time he came up with something extra ordinary and you can feel his hard efforts to create something completely different. Maybe also to show a bit, that he can do so much better, then repeating himself over and over again? Who knows. His vocal performance is great as always and I think that his more raspy shouts and screams on most of the songs are a perfect addition to his growling. Next in line is Bob with his, as always, quite simple but nevertheless tight and more than effective drumming, which is absolutely appropriate to the total sound and concept of "Realm Of Filth". I always enjoyed his drumming back in his ASPYHX days and still do. Luckily he continued with SOULBURN after he parted ways with aforementioned. He might not be the most technical or even skilled drummer, but that’s not important at all. He is an old school (sorry for using this term!) drummer from the bottom of his heart which you are able to hear with every punch. Enough of buttering up those two dudes? Alright, so let’s keep it short in the end. MINOTAUR HEAD won’t win any award for originality or the best album of 2016, but nevertheless this is a release totally worth your attention and I recommend you to dare a listen if you are into well crafted and interesting Doom / Death. No ground breaking stuff here, but for my share a great release that does not become boring, even if you listen to it for several time in a row like I did. War Anthem Records once again had a good nose for quality releases. You can already pre-order the CD and LP, so don’t waste any time and check the webstore at www.war-anthem.de or say hi to the band at www.facebook.com/minotaur-head-893391864093304