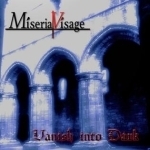 Another one-man project, from Leeds in the United Kingdom this time. Theta, who started his project in 2012, is the man behind MISERIA VISAGE. Since that day, he released a one-song single and contributed two songs to the "Tribune Of Shadow" compilation on Three Rooks. But these songs are all featured here as well. Like most of the other one-man bands, Theta tries to bring his vision of Symphonic or Avant-Garde Black Metal to life. And there’s still a long way to go. Six songs of keyboard-laden stuff, with harsh vocals in Black Metal style. Sounds like it’s nothing new and very unspectacular. And, indeed, it is! The opener ‘Phantoms’ shows the way for the rest of the EP: some guitars, a drum computer and some keyboards try to form a song. None of them sound really good and the vocals are exchangeable. What annoys me most is the drum sound. OK, it is a machine… But it’s painful if it also sounds like a machine most of the time. And the keyboard sound is too flat either, even though it stifles the guitars too often. The only little exception here is ‘Luciferian’, the only song with some power and some nice melodies. All in all, "Vanish Into Dark" sounds pretty wishy-washy and unexciting. But people into symphonic stuff should risk an ear: www.records.threerooks.net, www.facebook.com/miseriavisage, http://miseriavisage.bandcamp.com