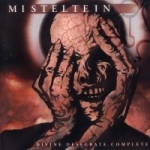 For all of you who aren’t familiar with Sweden’s MISTELTEIN yet, here’s some facts for ya: “Divine, Desecrate, Complete” is already their second full length offering (following the band’s debut “Rape In Rapture”), with a production courtesy of Malmö’s quite famous Berno Studio. MISTELTEIN have been around since 1996 by now and have dedicated themselves to the fast, aggressive Black Metal of the modern kind. And besides the rather stupid looking coverart, that’s probably the band’s main problem. Even though they deliver solid and quite furious compositions, their real strength quite obviously can be found in the midpaced stuff. There’s actually some really impressive and crushing killer riffing to be discovered, while the very well executed highspeed passages are mostly quite ordinary and unfortunately pretty typical for this genre. The use of keyboards compliments most parts on the album, but never to the extend that it sounds wimpy or cheap in any way. So, all in all this is a partly promising, yet not completely convincing second album of a band, worth to keep an eye on in the near future.