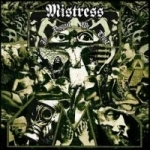 On their third album Birmingham’s MISTRESS offer a rawly sounding mix of early 90s Death Metal, Crustpunk, Grind- and Sludgecore. MISTRESS make an effort to keep all ten songs diverse by varying forceful mid- and uptempo as well as blastbeats. The production itself is flawless, and both instruments and vocals come crashing on your ears. Especially the guitars have a wonderfully destructive sound. As far as I’m concerned, the only conflicting thing about the vocals are a few rather weak attempts to imitate the screams of Rob Halford, on the side of vocal diversity they are a surprising element, but when I heard them for the first time, I was a bit puzzled. Fortunately, these high-pitched vocals only appear in a very small number of songs, while the majority of this album is intoned by brutal grunts, screams and gangshouts. As indicated in the header of this review, this "longplayer" is not as long it seems at first sight. After ten songs follow over twelve minutes of silence and then finally a short but rocking hidden track. To be honest, I hate this inflation of running time, do you know anyone who likes to fast-forward for hidden tracks? I bet you don’t. Anyway, although a bit short, this is a fresh record recommended for all friends of Punk-influenced groovy Death Metal. Bandpage: www.geocities.com/stomp666