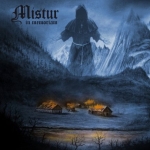 Just take a look at the cover and tell me, what song comes to your mind? Seven years after the debut "Attende" MISTUR from Norway are again traveling ‘One Road To Asa Bay’. For more than 25 years "Hammerheart" by BATHORY is a big influence for Viking Metal. Well, BATHORY invented Viking Metal, although Quorthon was not the first to mix orchestral and epic elements with electric guitars. However, the six songs on "In Memorian" include everything Viking Metal is known for, especially the blend BORKNAGAR established. Progressive songwriting, clear vocals, lots of keyboards, guitar soloing reminding more of Heavy than Black Metal, melodies ranging from depression over warlike aggression up to glorious epic moments of joyful bliss. The production and sound is top-notch, it can easily match up with mainstream music. From an objective or neutral point of view I must admit, this is pure perfection. Hard to imagine a band playing this style more immaculate and unflawed. But for me personally the album simply does not work. It is too much of everything. Not only bombastic keyboards, but very bombastic keyboards. Not only varied and clean vocals, but very varied and clean vocals. Not only cunning and crafty guitar work, but very cunning and crafty guitar work. And so on. Everything is just too much, more than once I felt dazzled and blended. So when it comes to Viking or Pagan Metal I’d rather listen to ASKRINN or GALAR. Bands with a more unpolished sound and laying more emphasis on a song or the idea behind a song instead of compressing dozens of ideas into one song. www.facebook.com/pages/mistur/334339291694, www.darkessencerecords.no