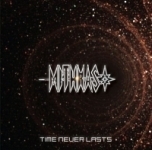 I was quite fond of MITHRAS when they back in the day commenced their attack upon naive earthlings into Death Metal. A brutal and relentless technical attack on all senses, the mighty MORBID ANGEL taken from their most brutal perspective and thrown into a vortex where time and shape were upheld in frozen form. Though somehow I grew tired of the punishment after a while, why I don’t know, though I do know I haven’t turned to MITHRAS much since, until I took it upon me to review this new self released EP from the Brits. The 2 new tracks, the title track and ‘Inside The Godmind’ send us the message the band is once again ready to unleash fresh music that grips the listener and let him or her ride through a darkened landscape in a hurricane of technical and catchy riffing, neck snapping breaks, cold and eerie melodies and blistering drum work, and of course on the top of it all, awe-invoking vocals. The ties to MORBID ANGEL haven’t been minimized, there is still a good amount of homage to the gods, even though MITHRAS has carved their own niche and paints their music in their exact manner. The atmosphere of both the new tracks are sublime, and the open guitar leads are often jawdropping and the raspy guitar style on ‘Inside The Godmind’ kick ass, together with overall darkness of the track. The only thing I miss is a little more soundable bass, all the time, when it gets its own space it is good, as in ‘Inside The Godmind’, though a bit too often it drowns behind the great walls of guitar. This is a nice little treat with 2 new songs that kicks ass traditional MITHRAS style and 2 good live recordings of old and proved material from the first album "Forever Advancing… Legions" and the closer from "Worlds Beyond The Veil", ‘Beyond The Eyes Of Man’ in a straight to the point version. The live tracks have a good sound and all instruments come clean through and the intense atmosphere on stage can be felt. Old geezers already into the band will enjoy this scoobey snack and youngans wanting to check out the band, can start here and get a kick out of it. And I have once again been turned to the dark side. Obtain more knowledge at: www.mithras.org.uk