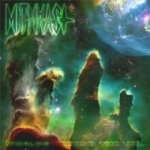 British Death Metal became a pretty rare pleasure lately and only DESECRATION, GOREROTTED and of course NAPALM DEATH managed to come up with satisfying releases. Now there is the second full-length of another British Death Metal act namely MITHRAS, but unfortunately it can not be added to the nice albums of the aforementioned bands. MITHRAS play extremely technical Death Metal and obviously do it with ambition, skill and the wish to experiment – they even try to implement psychedelic, spacy electronic sounds. But due to the miserable production, the lame vocalist that reminds me of new USURPER stuff and the bad drum sound MITHRAS fail. Their music has some sort of forced progressive aspect and appears totally artificial and constructed to me. Bands like ATHEIST, CYNIC, late DEATH have a certain progressive "flow" and sound despite all musical excess natural, but MITHRAS don’t. Still, I would encourage you to visit their website and judge for yourself, if your mind is open enough to understand their weird sounds: www.mithras.org.uk Their label can be found here: www.goldenlakeprods.co.uk.