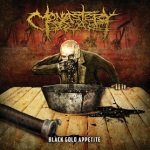 Russian Death Metal, it is that time of night! MONASTERY DEAD hails from Russia, and this is their third full length album, and the first time I stumble over the band. As you might have read out of the title, if not the cover artwork gave it away, the lyrical work on this release, is most of the way, politically and society releated. Actually a quite cool deal if you ask me, even though some might wanna say that Death Metal should be about death. The band is delivering a groovy take on technical Death Metal where SUFFOCATION and MISERY INDEX seems to be the big inspirations. They are delivering some good smashing Death Metal, with a good flow, some nice riffing and grooving and clever breaks. I’m not the biggest fan of the vocal delivery, though that’s a matter of taste, it as such fits the music well enough. Though I’m missing a tad, some more energy and intensity, a more hardhitting production, as it is a little tame and sterile, and that cuts off the energy I guess. MONASTERY DEAD is doing well, as a run of the mill band in this subgenre of Death Metal, I just miss some more aggression and a little kick in the head, once in a while, it becomes too bland, and after half of the album it all blends together, more or less. There are some good elements and things to develop further into some really hardhitters, though we’re just not all there yet. More info at: http://vk.com/monasterydead, http://satanath.com/sodp