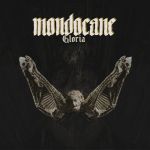 “Gloria” is the second offering from the Swedish incognito band MONDOCANE. The first release “Dvala” from the Swedes never really latched onto me. It has its moments, though the repetitive dark riffing, IMMORTAL era “At The Heart Of winter” and “Damned In Black”, just without the same hooking and grandiose atmospheres and brilliant riffing, the album just seemed to drag itself along the path of dark and cold Black Metal with an dark eerie, quite well done, doomy industrial feel to it. The new opus from MONDOCANE is more Black / Thrash oriented in the riffing, compared to the debut album, which suits me quite well. There is more intensity and fierceness over the music, and we get some more varied paces. The first album was quite dark and gloomy, with a sense of apocalypse over it. Not that “Gloria” is all sparks and happy days, it is still Black Metal oriented, with dark and drowning atmospheres, though the faster paces give me a better kick, the chainsaw riffing is more relentless and hitting, the dark synth, that occasionally is utilized, beneath the wall of guitars slay and do wonders. There is still a tiny industrial feel to it, though not much. The vocals are still inspired by a lighter version of the mighty Abbath, from back when he was on his top, mixed with the cold bleak articulation of Gard from KHOLD / TULUS – a mix that works quite well. ‘Via Dolorosa’ has a nice female choir which fits the slow atmospheric track quite well, a track that is followed by MONDOCANE’s rendition of DEPECHE MODE’s ‘Personal Jesus’, here dubbed ‘Demons’ also a track that works quite well. Then we get ‘Witness’, that musically takes us right back to the mid-nineties melodic Scandinavian Black Metal scene, still with the music cloaked in MONDOCANE’s heavy darkness, that style is taking a thrashy step further on the title track, where I really dig the vocal lines. That takes us into ‘Mytos’, which might be a continuation of ‘Mythe’ from the first album, I track I didn’t really get, and found a tad out of place compared to the rest of the album, as I do here, but I guess there is a deeper meaning behind it all. The second last track ‘Hydra’ is in the vein of classic melodic Black Metal, a quite good track with speed, precision and good melodies. The last track, which also features as the outro for the album, would do good, if half the length, but a track more in the vein of ‘Hydra’ would slay! I wasn’t caught by the band’s debut album, but this second offering has taken me a tad more in, with each spin it has received. I still really haven’t figured out what I think of the album. It has some really good moments, the progression from the debut, songwriting wise is enormous, as I more than once get quite gripped when listening to “Gloria”. MONDOCANE has for sure created their own sound, I can at least not come up with anything sounding like this – a nice splash in the sea of mundane. Reach out and touch faith at the following locations: www.facebook.com/mondocaneofficial, www.facebook.com/fallentemple666