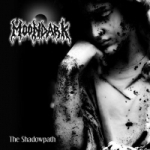 Can something recorded in Sweden in 1993 really be bad? MOONDARK was a project by guys who are more than wellknown nowadays, like Johan Jansson and Kennet Englund of CENTINEX / INTERMENT and Mattias Norman of KATATONIA / DELLAMORTE, and, as said on the inlay of the LP, their music was inspired by CRYPT OF KERBEROS (older stuff I imagine) and ETERNAL DARKNESS (their LP has been re-released by Temple Of Darkness Records too). So, what can you find here? Well, as you can imagine, none but dark and really heavy Death Metal in the old Swedish tradition. Maybe the production isn’t that good, more like a demo, with a crunchy guitar sound and almost no presence of the drums, but, who cares? “The Shadowpath” is a fucking enjoyable recording, seven tracks of dark midpaced heavy Death Metal, with a really low voice, groovy guitars in the purest tradition of Stockholm (even if they were from Avesta), a lot of tempo changes and good stuctures. That influence of CRYPT OF KERBEROS can be found in the slower stuff, the doomier, which remind a bit of BOLT THROWER too (not so many Swedish bands had that reference), and differs a bit from the usual focus on speed of the most typical bands. This was released in 1993 on a CD-R with pro-inserts limited to 299 copies, so it was pretty rare until now, but hopefully Temple Of Darkness didn’t stop recovering some great jewels of the Swedish tradition and this LP (limited to 500 copies) is simply a must for every fan of old fashioned Death Metal. Get it or die! www.templeofdarknessrecords.com