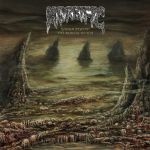 MORBIFIC from Finland are one of my favourite Death Metal bands belonging to the so-called New Wave Of Old School Death Metal. Here we have a pretty young band, formed in 2020, that proves that there are still maniacs able to play sick and putrid Death Metal in the traditional way and without a glossy and overproduced fake sound. “Squirm Beyond The Mortal Realm” is the second full length album recorded by these guys, an intense and solid piece of morbid and obscure Death Metal released by the Spanish label Memento Mori. Ten songs for almost 38 minutes of old school putridity that follows an excellent debut album entitled “Ominous Seep Of Putridity”. This a gory and rotten release with a gloomy, cadaverous and extremely putrescent atmosphere. Most of the songs are structured on a slow and mid tempo Death Metal basis with tons of D-Beats alternated with Doomy parts. The main influences are: AUTOPSY, IMPETIGO from “Horror Of The Zombies”, early MORTICIAN, DR SHRINKER, early CANCER, early OBITUARY, early DEATH, GOREAPHOBIA and a serious touch of Finnish Death Metal (FUNEBRE, DEMILICH and ABHORRENCE above others). The vocals are guttural and cavernous growlings. The guitars and bass sound is raw and dirty in the good way. An extra point goes to the concept: a genuine hymn to gore, splattered depravity and festering insanity. The front cover artwork brings to mind the ending of the classic masterpiece “The Beyond”, a zombie flick directed by the godfather of gore Lucio Fulci in 1981. The only thing that doesn’t really convince me is the drumming on the accelerations, since the blastbeats are too forced, inaccurate and not fast enough. In conclusion, if you’re looking for the perfect soundtrack when you’re wandering in the night through piles of maggot infested corpses, MORBIFIC are the answer. And you’ll live in terror… For all eternity. www.facebook.com/morbific, www.facebook.com/memento.mori.label