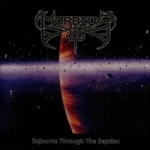 MORBIUS, a mostly overseen US-based Death Metal act already spawned in 1990 that made its first steps within the underground scene with demo and vinyl releases until in 1994 the band’s first album “The Shades Below” was released on Last World Records. Badly promoted and marketed MORBIUS debut was a total failure on the business side and with signing to Cyber Music and releasing “Alien Christ” plus concentrating on playing shows the band finally had better chances. Five years later this album here was recorded, yet until in 2005 it never got released for various reasons which you’ll better read yourself on the MORBIUS website (please see below for the link). “Sojourns Through The Septiac” is an occult, technically complex, epic and pretty weird album. I would describe its sound as MORTAL DECAY on hallucinogens! Add to this some MACABRE-like hysterical screams, some twisted melodies, monumental, countless breaks containing song structures and you have at least an idea of what to expect of this act. “Alien Christ” was an album you could easily grasp due to its focus on mid-tempo, “Sojourns…” is not extremely fast, too, but it is simply not very accessible nor does it offer many catchy moments, it’s extreme in the way the songs are structured and regarding the dedication always present on this release. To me personally “Sojourns…” is a little too demanding at times, especially due to these horribly screechy vocals now and then. However, the normal growls of Mr. Sylvester are cool and the overall, totally abnormal sound of MORBIUS has definitely something to it which makes it fascinating and unique. So, if you like Death Metal that is beyond reason and genre conventions try out this band, these guys are “far out” if you know what I mean… take it easy on the drugs, guys! www.morbiusdeathmetal.cjb.net. Label links: www.ncmrecords.com; www.stormsofsteel.tk