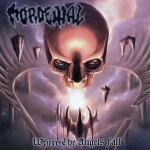 With MORDENIAL we have another Death Metal band from Sweden. And another band with a pretty high profiled name in its ranks, because Matthias Fiebig of PAGANIZER (and more) fame is the drummer and even the vocalist of MORDENIAL. He was joined by Kjetil Lynghaug on guitar and a guy named Wilson on bass. This line-up recorded “Where The Angels Fall”, the debut of MORDENIAL that now is out on Vic Records. And those who are overfed with classic Swedish Death (something that might never happen, at least not to me) can sigh with relief. MORDENIAL is much more rooted in Melodic Death and not too modern Thrash Metal. Sometimes the melodies and riffing even reminds of that what is called Metalcore or NWOAHM (huh? – Frank). So there might be a space of their own for MORDENIAL, but sadly not in my universe. Well, at least not really, due to the pretty modern orientation. Some moments are still pretty enjoyable for diggers of the more primordial and old school of extreme Metal, like the opener ‘In Dusk I Come’. This one is definitely in the tradition of mid 1990s Gothenburg bands like IN FLAMES. In the long run, the mostly mid paced speed of the album is a little boring. It’s just like you want to give the guys a vitamin injection to increase the tempo not just every now and then. That’s why I prefer songs like ‘Come Inside The Darkness’, a rather classic Metal inspired tune by the way, or ‘Time To Justify Your Sins’, just because they are blessed with some faster parts as well. All in all, “Where The Angels Fall” ain’t a bad album, since it’s performed by fine musicians, even Matthias Fiebig’s pretty Black Metal styled vocals are surprisingly good. It’s just that it misses the final kick in the ass and comes along too modern to really convince me. Those who don’t understand me praising the primitive, rough and primeval side of Metal should check out www.facebook.com/pages/mordenial/524164104262270 or www.vicrecords.com