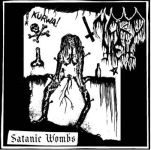 Polish blasphemous Black Metal band MORDHELL formed back in 2003 and this is their fourth album, along many other demos, splits and compilations. There are actually five songs of their own and three covers on here, which is kinda strange, to include that many in an album. But then again who cares? Ok, in their own songs, the band plays a style not far away from what Gylve and Ted were doing when trying to emulate Tom and Martin, which is not that bad actually. There is also that old crusty Punk sound and attitude that is vomiting through the speakers. The production is raw, yet well done and captures the essence of the band. Basic guitar riffs, basic drums and some well done vocals that recall a Black Metal style that was popular in Norway, yet with a personal touch and the reverence to Satanic Slaughter and their hammers of hell. The covers are actually interesting, as they fit the aura (well at least the ones by B. Forsberg and Gylve & Ted), but the one of Vikernes, which is a complete atmospheric one, is a bit weird. But again, who am I to tell that if they felt like doing it. Necro as hell, and definitely worth a try if you like / know the names. More about MORDHELL at: www.facebook.com/mordhell, label contact: www.facebook.com/fallentemple666