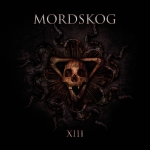 Formed way back in 2003 in Mexico City by Lugubrem, this album finally sees the light (or darkness) of day after being recorded quite a few years ago. But things do happen for a reason. This debut album simply titled “XIII” is the culmination of hard work for this band, that plays Black Metal in a dark and lugubrious way, with influences from other music styles that are always dark and evil, including Death Metal and horror soundtracks. The band is wise enough to use many tempos on their songs and also to notice is the quite versatile vocal style of Lugubrem (who has been very active since a few years not only in the Mexican underground but abroad as well, doing vocals for bands like ERESHKIGAL, ENDSTILLE from Germany, CRIMSON MOON and even the Death Metal legends from Mexico BLACKTHORN just to name a few). There is a definitive spiritual essence all around in the album, where the use of normal vocals and chants can be heard in a few pieces. The band is completed by the string work of Murmur, who already has done work with REPVBLIKA and HABORYM and the drums by Prothesis who has played live and in studio with bands like VITAL REMAINS, BLACKTHORN and HACAVITZ just to name a few. With such a strong line-up it is no coincidence they have crafted a very well done work of darkness ad spiritual agony. Their style can be compared to Black Metal bands, like GEHENNA, MAYHEM or early WATAIN with touches of bands like NECROPHOBIC, DISSECTION, early BATHORY and CELTIC FROST. The execution and recording values are also very good. Having seen the band live I can assure you they put this ritual of music pretty much the way darkness calls. The lyrical approach is also centered in the ancient Mexican cult of mother death. The use of Latin in the song titles is done to emphasize the overall aura of ancient darkness. This is the kind of album that one discovers new things with every listen. Definitely a recommended work for fans of obscure, sacrifice inducing and death worshiping Black Metal. www.facebook.com/mordskog, https://hellsheadbangers.bandcamp.com