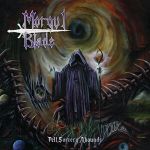 MORGUL BLADE spawned from Pennsylvania around 2018 and now came up with their debut full length “Fell Sorcery Abounds”. Their debut demo “Harbringers Of Power And The World’s End” from 2019 had all the hints of the direction that will now be advanced on this album. And upon that foundation these Pennsylvanians laid out nine compositions where history and folklore combine. Like storytelling their Epic Metal in the style of old MANOWAR, BATHORY, ETERNAL CHAMPION and VISIGOTH is stylishly mixed with the heavy rumble of the second wave Black Metal during the 90s. This mixture may seem quite exploratory, but MORGUL BLADE manages to create an atmospherically dense album with stimulating movements, transitions and individuality. The title track with its enticing clear vocals, choirs and solemn moments sounds epic and expansive till the end. As that sets the tone, incoming ‘The Five Will Ride At Dawn’ or ‘The Beacons Must Be Lit’ move in mid-tempo most of the time. In terms of Heavy Metal, the full range is shown here and also says their songwriting is convincing at all times. The opening ‘He Who Sits Upon The Black Throne Of Angmar / The Morgul Blade’ and also ‘In The Grip Of The Dark Lord’ are the best declarations for that. Surely, none of this is new. Rather, MORGUL BLADE assembles well-known set pieces into a stirring and thoroughly amusing 35 minutes, like all Tolkien fanatics feel, while voyaging through gloom and grandeur. Overall, “Fell Sorcery Abounds” is a statement debut effort from MORGUL BLADE and it will be exciting to see what direction they will follow in the future. More about the band and label here: www.facebook.com/morgulbladehm, www.facebook.com/noremorserecordsgreece