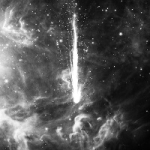 A one man band formed back in 2013 with already 10, yes 10 full length albums! But of those albums, and some other EPs and demos, only few have been released in a physical format. Most of the others are available as digital only on their bandcamp site. This is at least getting a physical CD release and it is supposed to be their first album, but for some reason it came out as number 9 in order. MORPHINIST plays some kind of very atmospheric Black Metal to the point of being almost an instrumental band, yet, there are many parts with typical Black Metal voices, but so far no lyrics to be found. Sometimes the band sounds like a melodic Doom Metal band, there are touches of Post Rock in many places, and also some depressive suicidal Black Metal touches. Still, the enigmatic way they play, they create music and they perform, makes this interesting. A few bursts of fast Metal are also to be found. The overall playing is quite good too, and the production, although a bit on the raw side, works fine. If early BURZUM in a more well-played stage, mixes with some doom à la old ANATHEMA with touches of the new ANATHEMA and a bit of SHINING, maybe it could sound similar. For 3 songs, 2 of them well over 14 minutes, this is truly an experience that must be heard if you like atmospheric sounding Black / Doom Metal with some Post Rock influence. And if you like, please buy the physical format! www.facebook.com/morphinistprojekt, http://morphinist.bandcamp.com