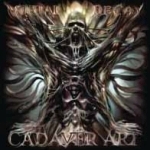 Not really one of the fastest composing Death Metal bands, it took New York’s MORTAL DECAY three years to come up with a new full-length after 2002’s “Forensic” and “Sickening Erotic Fanaticism” released in 1997 (just recently reissued by Unique Leader). Now it’s 2005 and the guys strike back with a murderous slab of technical yet comprehensible brutal Death Metal. “Cadaver Art” is not as experimental and weird as “Forensic” but stands in one line with the debut album. Driving straight passages unite with elaborated often quite melodic leads, remarkable bass playing and twisted rhythmical structures without losing grip on the essence of each song. Like all MORTAL DECAY material there are some nice hooks hidden here and there and skilfully inserted breaks keep the songs interesting and surprising. Thus “Cadaver Art” is a highly entertaining, unfortunately a little muddy produced morbid and violent piece of Death Metal with some outstanding tracks like the opener ‘Consumation’, the extremely diverse ‘The Ravenous Addiction’ and the enthrallingly composed ‘Re-Animate’ and ‘Cadaverous Sculptures Part II’. The production might have been better and some leads less might have improved the intensity of the album as well, but nonetheless this is a great return and recommend effort for all deadbangers out there! www.uniqueleader.com