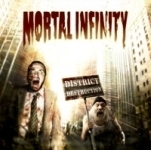 German Thrash has always had its own distinct sound and varies from the San Francisco area Thrash sound. Both styles are great and really provide a bit of international competitiveness between the bands involved. Enter MORTAL INFINITY who recently released their debut album “District Destruction”. They are from Germany but their sound is very Bay Area-ish. These guys make an attempt to mesh the two elements of Thrash Metal that can potentially become a possible gumbo of a headbanging feast. After an acoustic intro, the album starts out with the track ‘Thrill To Kill’. The music reminds me of latest material that EXODUS has released (think “Shovel Headed Kill Machine"). Razor sharp guitar picking and good song structure make this a nice lead off track. The song’s tempo varies and provides a change of pace in order to keep things interesting. Lyrically I can’t say this is the best song written, but sometimes less is more. Things really pick up with track 3 ‘At Dawn Of Death’ and its rampant chugging guitars. The guitar solos here are wicked and in all honesty I think this should have been the lead off track to really give the audience a feel for what MORTAL INFINITY brings to the table. Musically as mentioned before these guys do sound like today’s version of EXODUS and that is not a bad thing. I happen to like EXODUS’ “Shovel Headed Kill Machine” and thought it really gave an injection of new blood and ideas to them. Vocally the singer does really sound like Rob from EXODUS and has similar range as well, which at times can include a Death Metal growl. I can see these guys coming over to the USA for a tour with the likes of MUNICIPAL WASTE, TOXIC HOLOCAUST, or DEATH ANGEL. Either way the band is off to a decent start and will need some time to perfect their craft. A quick rundown for this album is simple, we have a German Thrash band playing American Thrash and really giving competition to the USA. The music was pretty good; the album is worth a couple of spins, and a solid debut for MORTAL INFINITY. Now that the baseline has been set with this debut it will be a challenge to see what the band will do for a follow up. For more info: www.facebook.com/mortalinfinity, www.digitalmediarecords.com