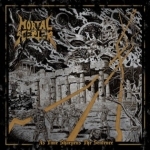 First surprise – this is an EP. Did not notice this fact until I started writing the review, because full-length albums with a running time about 30 minutes are quite common. But since MORTAL SCEPTER are a new band and only active for three years and just released one demo (simply entitled "Demo") in 2014 an EP is always the proper choice. "As Time Sharpens The Sentence" takes you back a long way in time, when Thrash Metal reigned with furious rage. Listening to this album brings names like SODOM, KREATOR, DESTRUCTION, SEPULTURA, and quite a few others to my mind. Of course just the early works of the mentioned bands. MORTAL SCEPTER perfectly captured the style of that era. Fast, aggressive, chaotic, assaulting vocals (with some interspersed high screams). The five songs (plus a cover of ‘Total Desaster’ by DESTRUCTION) are exploding right in your ears. What I liked most about this release is the sheer joy of playing the four french horsemen are able to transfer. The pulsating bass and the frantic guitars are taking the lead, the drummer tries to keep up pace whilst the vocalist is snarling hatred and hell upon mankind. At some moments this whole brew sounds pretty chaotic but the band manages every time to turn the corner in direction of homogenous song. Well done! More information at: www.facebook.com/mortalscepter, http://mortalscepter.bandcamp.com, www.unspeakableaxerecords.com