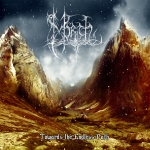 MORTH is a one-man "Black Metal" project from Bulgaria. I know that without even checking the facts, because I recorded music for a very short-lived ritual noise project by the same name years ago, and I remember that MORTH guy getting all upset because someone else used the same name. While my project was terrible to begin with, this MORTH here isn’t all that great either… when you say a picture hits the eye, you take that as figure of speech most of the time; this cover here really DOES hit the eye because it’s so goddamn ugly. Ouch. Let’s press play. Exactly what I expected… sigh. And by "sigh" I don’t mean the Japanese band. How do I say this in a polite way? This is everything that’s wrong with Black Metal: this isn’t evil in the slightest. It’s jumpy and bouncy, it’s catchy and upbeat… it basically is anything BUT Black Metal, despite the tremolo picking and the shrieky vocals. Euronymous isn’t amused and neither am I. Sure, there are some decent parts that even make me think of ENSLAVED, but most of it is festival ready DIMMU BORGIR drivel or a NARGAROTH clone circa "Jahreszeiten“ – and we all remember how crappy those carnival tunes were. Or NARGAROTH in general. But this isn’t about retarded Germans in TV talk shows, it’s about writing a record. And that record is cringeworthy, ridiculous, cocky and prententious – pretty much Black Metal for people who don’t like Black Metal. I have been known to buy a lot of shit over the years, but I wouldn’t touch this with a medieval sword. www.facebook.com/morthmetal, https://symbolofdomination.bandcamp.com, www.satanath.com