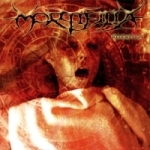 FUCKYEAH! Finally! Mondongo Canibale has a band worth writing about! I have to tell you I started to feel a bit bad with the continuous slaughter of this record label’s roster of bands reviewed herein. As this company obviously has enough finances and dedication for each band it carries, not to mention the level of quality that is in fact present within the production and manufacture of each record they put out, quality enough to stagger even those who work at RELAPSE, CENTURY MEDIA, NUCLEAR BLAST, etc. However, the suicide factor of these compact discs from Mondongo Canibale, were and are the actual bands that were chosen for release. As a listen to each of the bands on Mondongo’s roster provoked this listener into fits of nausea, as each one of these acts just ate from the proverbial bucket of shit, that is until now! From Susice, Czech Republic hail MORTIFILIA. The undisputed hellions of their township and valid challengers to the Death Metal crown that their fellow countrymen, the Death masters KRABATHOR, have had an iron will to hold onto since the early ’90s! MORTIFILIA conjure up a sick blend of heavy and precision delivered Swedish styled Death Metal in the wake of old DISMEMBER, AT THE GATES and DESULTORY with a vocalist soundly reminiscent of Johan Hegg of AMON AMARTH. MORTIFILIA is a breath of life to this rotted soul! Contact: Pavel@mortifilia.cz or www.mortifilia.cz or www.mondongocanibale.com or Mondongo Canibale Records, P.O. Box 27106, 28080 Madrid, Spain.