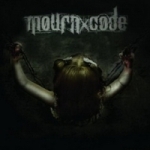 It’s been a good while since I’ve been following the Mexican Death Metal scene, I haven’t listened much to new Mexican Metal since my friend Joel from American Line Recordings stopped sending me his releases back in the days. Back then most Mexican Death Metal was about CARCASS worship or darker than dark occult Death Metal, both enjoyable genres in my ears. With that out of the way it should be evident, that this is my first encounter with MOURN CODE – a blast from Aguascalientes, delivering headcrushing technical and brutal as fuck Death Metal. The problem I have with technical Death Metal, is that it a bit too often isn’t coherent, very few bands have the songwriting skills to add a flow to their great skills as musicians, and it all skids into a muddy pile of frantic wankery. MOURN CODE has crafted some quite enjoyable and flowing songs, even though they here and there are loosing the flow. But again it is a young band, and this is their first full length release, which can be heard – not all the ideas are coming through and they are not always that tight. A song like ‘Disaffection’ is brutal as hell and plows down the road, until a neoclassical guitar solo is shredding its way into the sound picture, while the beat speeds even more up – that adds a lot to the track, a sign of good composing. Other songs that I enjoy is ‘In Honor To Hate’ which is nice and coherent without loosing the brutal as fuck touch, and the riffing in the first half of ‘Ablazing The Grudge’ is good with the trademark Swedish buzzsaw tone – and the atmosphere it sets up is eerie, a shame that the second part of the track is somewhat weak. MOURN CODE is an exciting encounter and a young band that should have a great future ahead of them. They are still somewhat raw in the handling of their instruments, though have the raw skills that will shred with a little perfection – and the drummer will soon become a real monster! A brutal gory tour de force of heavy and crushing Death Metal spiced up with technical pieces and blasting speeds with some greatly executed varied vocals – I am looking forward to hearing further from these guys! www.myspace.com/mournerseve