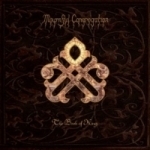 My heartbeat is dropping down… I almost don’t feel it anymore… am I dead or am I still alive? That’s how I always tend to feel whenever some Funeral Doom Metal crosses my way. From Adelaide, South Australia comes this incredibly sludg-ish and slowly crawling act named MOURNFUL CONGREGATION, and the band’s 4th record, titled "The Book Of Kings", was released a little over a year ago, in November 2011 precisely. The album features just 4 songs, and nearly 77-minutes of ultra-slow Funeral Doom Metal into the vein of THERGOTHON, SKEPTICISM and such ‘keep-it-slow-in-the-curve’ worshippers. "The Book Of Kings" ain’t for everyone, and to like the album at least a bit, truly demands quite a lot from a listener itself. If you feel depressed and overall think life sucks on all accounts, then I wouldn’t suggest you to touch the record at all. It may drive you into a final solution… with a gun, knife or any other sharp object. But if you are the kind of person that can really enjoy and understand some deeper aesthetics of MOURNFUL CONGREGATION’s every heartbeat-erasing, depressive yet at times so beautiful Funeral Doom Metal, then undoubtedly heaploads of artistic joy can be found from this slab. I think I am on my halfway to catch the joy out of this release. Just don’t know yet whether I will ever be that successful at that or not. More about MOURNFUL CONGREGATION right here: www.mournfulcongregation.com, label: www.weirdtruth.jp