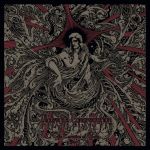 It’s been four years since the last production of Australia’s Funeral Doom Metal godfathers was released. In the meantime human kind has been craving its own end. But unfortunately it has not happened yet. This EP release consists of three songs, two of them are new and the third one is a re-recording of a piece of MOURNFUL CONGREGATION’s 1995 demo, “An Epic Dream Of Desire”, the one that named this gem in Funeral Doom Metal history. On “The Exuviae Of Gods – Part I”, Tim Call (ALDEBARAN, WEREGOAT, SEMPITERNAL DUSK) plays the drums. This is the second production where this American drummer makes his presence in the MOURNFUL CONGREGATION line-up. A great adition to Damon Good’s primordial band. Everything that Good creates is pure and fantastic gold. The cover art for “The Exuviae Of Gods – Part I” was made by Kamazid, delivering an exquisite illustration and the use of red tonalities. Even MOURNFUL CONGREGATION’s logo took this color for the very first time. Well, considering the mournful hymns of this production, the songs will be enlisted and described concerning my thinking in the following way: ‘Mountains Shadows, Cast Through Time’: 13:45 minutes of excellence. One of the most melodic songs in MOURNFUL CONGREGATION’s history. The vocals have more presence and deliver a pain in cathartic forms (in clean and growled ways). The tempos made me think of their 2009 album “The June Frost” and the double drumming remembered me on ‘Suffer The Storms’, contained in the 1994 Demo “Weeping”. ‘Mountains Shadows, Cast Through Time’ is a composition that only shows the authenticity of MOURNFUL CONGREGATION. No band in the whole world can make this kind of music. ‘The Exuviae Of Gods’: an instrumental song of 7:11 minutes, where the acoustic and electric guitars take you on a journey of peace and melancholy. The frets in the guitars give life to this piece of art. ‘An Epic Dream Of Desire’: this is the way of how an old song must be re-recorded. The esscense of ‘An An Epic Dream Of Desire’ is still there, as it was in 1995, the sound is better because of the different type of productions then and now. An example of how to mantain the musical convictions and not succumbing into the horrible business. “The Exuviae Of Gods – Part 2” will be released some time later this year. Until then, I will keep on asserting that MOURNFUL CONGREGATION is the best band in the Funeral Doom Metal genre. If it is too slow for you, you are too young. More info at: www.facebook.com/mournfulcongregation, www.facebook.com/osmoseproductions