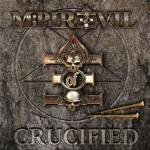 This is a 2013 release, but as it just arrived at the Voices From The Darkside headquarters, and as we had no review of this album yet, let’s write a few words about "Crucified". It’s probably safe to say most of you will love this album, both because of the songs you will find here, and because of the guys who play them. M:PIRE OF EVIL is the new band of the ex – VENOM musicians Tony "Demolition Man" Dolan (who sung on VENOM albums from 1989 to 1992, incl. the amazing "Temples Of Ice" and "Prime Evil"), and Jeff "Mantas" Dunn. "Crucified" is a collection of nine VENOM songs which were re-recorded by M:PIRE OF EVIL, completed with 2 original songs taken from the "Demone" 7" single, which also came out in 2013. So how about these new versions of VENOM classics? And what did you expect from musicians of this class? They’re awesome: heavy as fuck – heavier than the original versions – played well and very tight. In most cases when a band re-records own songs (yes, in this case we can talk they re-recorded their own songs), something is missing, be it energy, atmosphere, or the original unique vibe. But not in this case: you will enjoy these songs if you like the original versions, and if you never heard them before. The two M:PIRE OF EVIL originals complete the album in a great way, as you won’t hear any big difference between the mentioned VENOM classics, and them. To sum it up: VENOM die hards, this is a band you want to follow! For the record: the Japanese version of this album includes 2 bonus tracks: live bootleg versions of ‘Black Metal’ and ‘Witching Hour’. More information: www.mpireofevil.com, www.facebook.com/mpireofevil, www.spiritual-beast.com