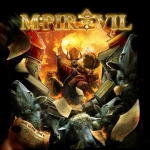 M:PIRE OF EVIL
Hell To The Holy / Creatures Of The Black
(Spiritual Beast Records)
78:42min

Fans of VENOM’s albums with Tony "Demolition Man" Dolan will surely appreciate this band. M:PIRE OF EVIL is the partnership between Mantas and Tony, both formerly of VENOM (hopefully you knew that already :P) and it’s great. "Hell To The Holy" is the band’s first full length album, and "Creatures Of The Black" (included as a bonus disc in this Japanese edition – Frank) is an EP with two originals and covers of ‘Exciter’ by JUDAS PRIEST, ‘Motorhead’, obviously by MOTÖRHEAD, ‘Hell Ain’t A Bad Place To Be’ by AC/DC, and ‘God Of Thunder’ by KISS. The ‘Exciter’ cover is cool, and it’s always fun to hear an artist give homage to songs that influenced him. I can say the same for the MOTÖRHEAD cover. The great thing is Tony doesn’t have to try that hard to sound like Lemmy, his voice is already deep and gravelly. So I can imagine recording this song was fun for them. Nothing like a good time, right? ‘Reptile’ is one of the two originals on "Creatures…", and I’m not too keen on it. Maybe it’s because knowing who Demolition Man and Mantas are, it’s disarming to hear blast beats and down tuned riffs coming from them. As it goes on though, there’s a good chorus and it isn’t awful as a whole so it’s quite possible to sit through. The KISS cover is ace, a lot of fun to listen to. Again, because you know who these guys are and where they come from (fuckin’ VENOM!) it’s great to hear them play songs that most probably influenced them their entire lives, including the VENOM material. They do a great job on the AC/DC cover as well. Hell ain’t a bad place to be indeed if Tony and Mantas do good covers. And lastly, "Creatures Of The Black" closes with the title track, the second original track on this EP. This one is good, too, along the same lines as ‘Reptile’ so again it’s a little odd to hear sometimes almost groovy riffs coming from these guys. But, it is not a bad song at all. However, of much higher quality is the debut full length, "Hell To The Holy". Having seen the band play this material live, I can say it was damn cool to witness. The opening song ‘Hellspawn’ just hits the ground running and Demoliton Man spits rapid fire on the chorus, it’s like the crazy fast lines Tom Araya sings on ‘Dittohead’ (from 1994’s "Divine Intervention"). So, a lot of great things about this record. These songs sound nothing like their counterparts on the EP. They aren’t too noisy. If anything, I think this album is a big surprise and a wake-up call for those who don’t expect much from former members of VENOM. Despite the time you spend looking for things to complain about this release, it always delivers something worthy and heavy. Even songs that get off to a quaky start like ‘Wake Up Dead’ soldier on and improve. The title track has an overly long intro of 2 minutes so if anything maybe that is the weakest point on the record. But, the song itself is heavy, catchy, and with great hooks. One of my favorites is ‘Snake Pit’. It’s a song about drinking and Metal. What else do you need? Now, the song ‘Devil’ is truly cool. Even more than the EP of covers, the blues riff that opens the song does a lot to let you know what their roots are as musicians. It’s bloody great, and although that segment of music isn’t that Metal it’s still eerie and dark, which are staples of much great Metal. Another favorite is ‘Shockwave’. Old VENOM is present in the riffs here. Very kick ass! Speaking of the old VENOM lads, it seems to me ‘The 8th Gate’ is another song that seems like it bears the old mark of VENOM more than others. Well, in summation, all I can say is this an impressive record. I encourage everyone to check it out and see what Demoliton Man and Mantas are up to these days! www.mpireofevil.com, www.facebook.com/mpireofevil, www.spiritual-beast.com