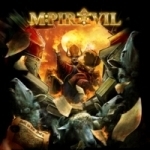 M:PIRE OF EVIL
Hell To The Holy
(Scarlet Records)
53:01min

VENOM… a word that for some of us older Metallers will always mean the root of all evil… they can be named as the creators of what Black and Death Metal was soon to become, yet in their heart they were a Heavy Metal band… but one that was soon to evolve into darker territories… then again, after so many years it was clearly simple what made VENOM what they were in their prime evil time: Cronos, Mantas and Abaddon. If ANY of these elements was out of the picture, then the final result was not the one of metallic blackness. Add to that the charm of their musical initiation and the very unorthodox (for the time) way of playing, composing, tuning… and hell was invoked unto earth. But then, that primordial force was too strong to go united and then it was no more for a while… they tried to continue with a new line-up. They once returned again for one album, and the black magic was there… for just one album. Line-up changes happened again and thus the magick was gone… forever gone. And I do not care if a person tells me they have seen VENOM live IF it was not Mantas, Cronos and Abaddon playing, then it was NOT VENOM. Most of the VENOM original members have done works on their own with many keeping a foot on the Metal realm. This M:PIRE OF EVIL is one of those. The main band is actually formed by guitar hero Mantas (and using hero as a more “mythological” sense rather than a musical one) and of all things weird, other two members that were once playing in a band that was also named VENOM and actually played songs from that band. No, I will never say that this band is formed in its entirety by ex-VENOM members… there is only one ex-VENOM member here, period. This entire prelude, to get into the band we are now exposed. The first thing that strikes me is the name… M:PIRE? Where is the “E”? Have they forgotten to use the English language? Oh, well… at least they are keeping an evil approach… but it is way too sad that it will probably be the only thing that the band will probably be remembered… musically this is weak, standard Heavy / Thrash, that of all things reminds me to some Bay Area Thrash like TESTAMENT or DEFIANCE, even I can hear some PANTERA sound with yes, a bit, tiny bit of sound like early VENOM. Also more than once I can sense an AC/DC touch here and there. Tony’s vocals are too much tough guy sounding and it is also a part I never really cared for in his very own band ATOMKRAFT back in the day. It will be almost useless to tell you that they have huge production values; they are very good musicians, and all that crap. But, yes, they do have a great production and performance. Still, this cannot be saved from being just another release with many bands doing it way better and more interesting. The only song I can really appreciate and is really a very good one is the last one ‘The 8th Gate’ which of all things sounded to me like CANDLEMASS… but alas, I have to endure through many forgettable songs to get a good one. Now if you excuse, I will go to listen to Abaddon, Cronos and Mantas in a crude, thousand times unpolished and less competent music performance but with million times the black soul and energy I am looking for. “Welcome To Hell”. All is said and done. www.mpireofevil.com, www.facebook.com/mpireofevil, www.scarletrecords.it