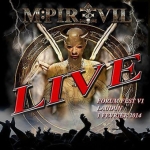 They’re fast! The band started in 2010, and they already released 2 albums, 2 singles, a split EP, and now a live album. "Live Forum Fest VI" as the title says is a live album, which was recorded in February of 2014 in France. As you probably already know, M:PIRE OF EVIL is the new band of two ex – VENOM members: Demolition Man and Mantas, and except doing new songs, they kind of continue what they started with VENOM on the great "Prime Evil", "Temples Of Ice" and "The Waste Lands" albums. And that’s great, as these albums which are not as popular as the early VENOM releases such as "Welcome To Hell" or "Black Metal", were really, really good. "Live Forum Fest" includes 8 songs – 5 x M:PIRE OF EVIL original, and 3 x VENOM songs: ‘Blackened Are The Priests’, ‘Carnivorous’ and ‘Temples Of Ice’. The sound quality is pretty good (definitely a soundboard recording with good mix): you can feel the heat of the moment, there are no overdubs here, but everything sounds clean and transparent (if we can use the word "clean" while describing sounds made by VENOM musicians). As each live album this release will be probably more interesting for fans of the band, but hey, if you aren’t M:PIRE OF EVIL fan yet, what stops you? They are great! More information: www.mpireofevil.com, www.facebook.com/mpireofevil