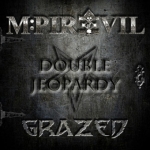 Well, I think most of you reading this might already know that M:PIRE OF EVIL is the band of the two VENOM veterans Mantas and Demolition Man, the latter also of ATOMKRAFT fame. These guys were the creative force behind the band when Cronos wasn’t in VENOM, so it’s no wonder that they already re-recorded several VENOM tunes from that period. On this spilt EP, or better collaboration EP, they did for the first time an approach to an older song of the magnificent three. The idea behind this version of the single-hit ‘Manitou’ was already born in 1999, when split partners GRAZED laid down the drum tracks. But it took fifteen years to finish the recordings with the guitars and bass of Mantas and the vocals of Demolition Man, accompanied by recent GRAZED singer Fabien and with both bands doing backing vocals. And this new version of ‘Manitou’ is pretty well and up to date without destroying the spirit of the original song, being a little bit more on the Thrash Metal side both bands prefer. Besides the “normal” version, ‘Manitou’ is featured here in a remix version, which is not that different to the other one, except for some tribal vocal samples. In my eyes, we might have done without this one… In addition, we find two live songs from each band on “Double Jeopardy”, all of them recorded at the Forum Fest. M:PIRE OF EVIL are here with their original songs ‘Wake Up Dead’ and ‘Hellspawn’, who were also featured on their live album “Live Forum Fest VI”. These two have a real good and authentic recording quality, pretty rough as it fits for the more European Thrash Metal style of M:PIRE OF EVIL. French Death / Thrash veterans GRAZED are featured here with the songs ‘Pepere No’ and ‘Boulamgator’, that features former vocalist Cigalou, who also sung the studio version of this one. Their walk on the edge of Death and Thrash is quite rough here as well. Yet, the two songs aren’t too original, with the brutal ‘Boulamgator’ being a lot cooler. As a bonus, we find a nearly 14 minutes long video clip, that is a kind of studio diary of the vocal recordings. This video footage might be interesting if you want to know how studio recordings work and funny for all the others. This whole “Double Jeopardy” EP is mainly for collectors of obscure stuff, but it might serve to check out the bands involved as well. Find out more here: www.mpireofevil.com, www.facebook.com/mpireofevil, www.facebook.com/pages/grazed/147451828646685