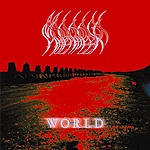 Once again it is time for a little history lesson here. Let’s go back to 1990, the time, when Death Metal and Grindcore were all the rage. Bands like CARCASS, NAPALM DEATH or TERRORIZER were fresh and exciting (well, they still are exciting). Also Japan couldn’t escape from this new and extreme style of music. The land of the rising sun always had a large and active extreme music scene during the 1980s, with early Grindcore style bands like OUTO, LIP CREAM and of course the mighty S.O.B.. Under the influence of the worldwide growing Grindcore mania, three guys, who played in a band called ASPHYXIA were joined by vocalist Takaaki Ohkuma and changed their name to MULTIPLEX in order to symbolize the variety of influences they had, like Industrial and Noise as well as Grind. This collaboration resulted in a demo, followed by two split releases, a 7" and finally an album called "World" on Japans premier Hard- and Grindcore label Selfish. The always busy guys from Xtreem Music now re-released this album and added all the other stuff as a bonus, which means nearly 80 minutes of historical stuff. The "World" CD starts off in best NAPALM DEATH tradition with an Industrial intro called ‘M.I.C.’, before ‘Empty Happiness’ opens the album quite Death Metallic. But then the next track ‘Like A Parhelion’ surprises with an Intro, which reminds of Hip Hop and leads over to a song with somehow jazzy breaks which could have been on any early DISHARMONIC ORCHESTRA release. And these Austrian Grind pioneers left their trace all over the album, as well as their fellow countrymen and partners in crime PUNGENT STENCH. But MULTIPLEX lead these ideas further to insanity. Just listen to the crazy ‘Human Zoo’. Breaks of Yngwie-esque guitar playing meet strange breaks and funky basslines. They even dared to use influences like Funk Metal icons PRIMUS in the title track. Thinking back, I only remember the two aforementioned Austrian bands who had comparable abilities as MULTIPLEX and played their Grindcore in such a crazy and progressive manner without falling into turmoil. If some European company discovered these Japanese ragers, the name MULTIPLEX would surely be legend nowadays. It is no wonder that the bonus material is not able keep up the high level of the album. But that doesn’t mean it is not worth listening to it. The two songs from the "Uncanny Complex" 7" EP (also released on the "Grinding Syndicate" 4-way-split along with an earlier version of the album opener ‘Empty Happiness’) are early 1990s Grindcore bastards that should satisfy every genre lunatic. And the same goes for the five tracks from the ‘Thrashing Deathpower’ split CD (originally released on Selfish with GIBBED and SATANIC HELLSLAUGHTER), that features an earler version of ‘Exasperation’ from "World" and a song called ‘Drowned In The Bog’ that already hinted on the things to come on that album. Finally we have the three songs MULTIPLEX recorded for their only demo from 1991. Even though the songs can be found on this CD in later versions (the songs from the 7" and a song from the album), these recordings are worth listening. Those earliest versions are more rooted in Death Metal and come along very brutal and raw. I definitely hold my thumbs up for this release! Grindcore lovers and history diggers should go here: www.xtreemmusic.com