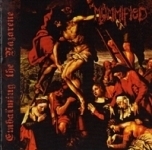 Issued in July 2011 by the obscure Russian label Nihil Art Records, through one of its sub divisions called Vomit in Silence Records, here we have Costa Rican Death Metallers MUMMIFIED and their full length album “Embalming The Nazarene”. The record itself present us a band that embarks into a slower form of Death Metal, called by the own band as Horror Death, which I think is correct given the creepy feeling the whole record has, evoking more the type of productions seen by mid 90s. Establishing kind of a parameter for comparison purposes, the sound texture reminds of the mighty US cult act HORROR OF HORRORS… "Sounds Of Eerie" / "Blood Of The Suspicious", I mean, straight to the point, crude and raw. As for the band does appeal more to slower forms of Death Metal, there are very interesting guitar arrangements, for example in the opening track ‘Malicious Incubus Excavation’ where some harmonies and melodies appear to add a twisted evil sound. Not to forget the “lugubrious” keyboard intro, very appropriate for Horror setting purposes. Given the old school approach, there are some intros used along the record, however, none of them exceeds the 20-30 seconds, so you don’t get bored, and in fact there are some really brilliant ones, like the one used in the 4th track ‘Passage Through The Ossuary Of Calamity’. Vocally speaking we find lower tone grasp invocations mixed with higher tone approaches whose main result is a combination that produces the sensation of listening an old man growling… really really wicked… like listening to your grandfather singing Death Metal… I feel part of the Horror approach they proclaim come from the voices definitely. The overall production is ok, a very simple booklet with two pages in full colour, cover, band photo and lyrics, the sound volume could have been louder but that doesn’t take down the record which seems to be more for fans of traditional Death Metal forms. For more info check out www.myspace.com/mummifiedofficial, www.nihilart.ru