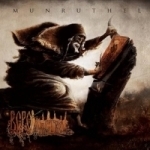 Svarga Music is a new label from Kharkiv in the Ukraine, which is focused on Ukrainian bands in order to give these bands the international attention they deserve. MUNRUTHEL’s fifth album "CREEDamage" is the third album they released, the first the band did for this label. And I’m not sure if MUNRUTHEL deserves international attention. The only member of this band is Munruthel himself, who did anything for himself. Munruthel earned his doubtful reputation as founding member and long time drummer of NOKTURNAL MORTUM. This band is rumored to be part of the Eastern European NSBM-scene, but these rumors didn’t come up when Munruthel was still part of the band. So let’s start with my reflections on this album now. MUNRUTHEL’s music is deeply rooted in the Ukrainian folk music, which is put in a symphonic Black and Epic Metal context. Sounds very exotic, yet interesting on first sight, but it sounds not as good as I hoped. After an instrumental intro the ‘Rolls Of Thunder From Fiery Skies’ set in – a mighty and very good track which breathes the spirit of the best moments of THERION’s later stuff, but comes along more intese and innovative. Also the Metal oriented ‘The Mown Dawns Lie On The Ground’ is worth mentioning, because the quiet parts offer the voice of Masha Arhipova (originally in АRKONA), singing Russian. After an ambient influenced track and a well done (but quite redundant) cover of BATHORYs ‘The Lake’ boredom starts to set in, culminating in a three-piece Instrumental (‘Karda I-III’), which runs nearly 16 minutes and bores me to death. Too sad to see the good approach getting killed by lack of inspiration. Less could have been more. If you are willing to find out more, there are two sites you can go to: www.munruthel.com, but my browser didn’t open this site, classified it as malware instead. Or check: www.svarga.eu. There will also be a Russian version of the album, entitled "ВЕРОломство", but this is only planned to be released in the former CIS-territories.