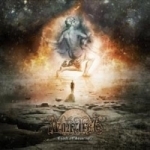 This is, if I am not wrong, the fifth full length recording of this Ukranian band (which seems to be formed just by one man), which has some connections with bands like NOKTRUNAL MORTUM. As far as I know the band started more into an ambient style, thus this disc is a very well executed form of Black Metal, with A LOT of symphonic elements, which of all things, reminds me in the essence to the music of Japanese composers like Nobuo Uematsu from the Final Fantasy games series, but in a very Heavy Metal way. Also, comparisons to some Viking era BATHORY, some early DIMMU BORGIR and even to some OPETH can be made. The dreamy cover art also speaks a lot for the music to be found here, which lyrically deals a great way with traditional Slavonic paganism, thus you can also add the folk feature which can be heard on the music. Vocally there is also a quite good use of clean and more Black Metal style vocals, that to be honest sound quite better in the clean voice. It reminded me of the great Lithuanian band OBTEST. With a very good and guitar orientated sound, some very good solos, and an overall quite great performance, this is amongst some of the best music I have heard in the style, which could easily fit any good RPG game or an epic magic adventure movie. In the end this is a good mixture of Folk, Power, Speed and Black Metal with an orchestral and epic feeling, done with passion and emotion as few bands are able to conjure. I wouldn’t be surprised if this is a concept album. There is a quite useless BURZUM cover (from Varg’s ambient era) but that does not take away the great achievement the band has done. www.munruthel.com, www.svarga.eu