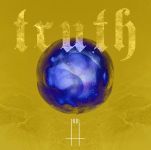 MUR is a band from Paris, signed to the famous record company Les Acteurs De L’Ombre Productions, who always pick up the cream of the creative French underground Black Metal scene. This could easily be the start of another quite euphoric review on one more fine new band. But in fact it isn’t. And the reason is quite simple: the sound of MUR definitely is more than one or two steps too far out in chaos and uneasy listening for my taste. And it’s not just that the listener should be prepared for another break every few seconds. What makes “Truth” even more hard to bear for me is the mix it presents. The basic of the songs can mainly be found in Black Metal, but it’s just the foundation on which MUR spread their strange ideas. Add THE DILLINGER ESCAPE PLAN, Industrial Metal, modern brutal Hardcore and an unhealthy dose of 1980s Synthie Pop to that and you’ll have a rough idea how “Truth” sounds. And believe me, if the chaotic, nearly unbearable Industrial elements wouldn’t already have spoiled “Truth” for me, the Synthie Pop would surely have done it. And as the ultimate irony, MUR did a cover of the song ‘Such A Shame’ from TALK TALK. A Metal band doing a cover of a song I hated so much back in the days that it ultimately confirmed me being a Metalhead! Honestly, this is too much for me! In case you’re still interested in checking out MUR, visit www.facebook.com/murgenius or www.facebook.com/ladloproductions